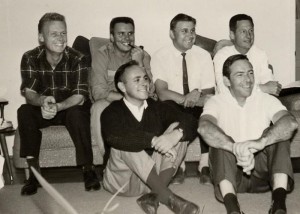 From the ideas at this meeting, a core group of six worked through 1964 on creating a club for those who simply wanted to cruise under sail. To avoid pomp, some preferred a club ‘President’ rather than a ‘Commodore’, but eventually, it was prudently decided to conform to the traditional yacht club practice, as set out in the current yachting bible, Chapman's, with a commodore, fleet captain, proper flag etiquette, dress for sailpasts, and a gavel for banging the meetings to order.

The original Constitution created by this group has required only minor changes over the years. In essence, the rules required ownership of a sailboat with a fixed cabin, and a return crossing of the Gulf as preconditions to membership. The fixed cabin was to exclude the wild ones willing to sail a dinghy across the Gulf to qualify.  Racing and power boating were excluded. Most important, the Club would not own facilities such as docks or a clubhouse, and consequently be inexpensive to join and to belong to. The new club would simply provide cruising fellowship. A friendly lawyer, Tony’s landlord, Judge Vance, registered the yacht club as a society in Victoria, and the Gulf Yacht Club was born.

Many of the forty-five who conceived the club, never actually qualified due to unsuitable boats, unfinished projects, or vagaries of life. But, because they felt the concept sound, they voted for rules that disqualified even themselves! No one, not even the founding executive, had yet met the Gulf crossing requirement, so none could yet be a member. 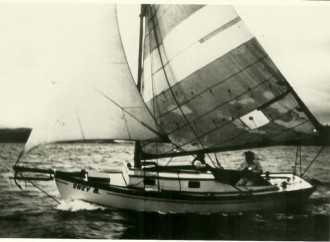 So at Easter 1965, a small fleet of sailors set out to cross The Gulf to become the first GYC members.  Don't forget the boats were mostly 20 footers, so you really wanted company during the crossing. Seven boats made the attempt, and the order of arrival at Pirates Cove, the very first club destination, was used to determine member numbers for the club roster. This in spite of the no-racing rule.

Bill Henderson's 30 ft, ’A’ class sloop was easily first, and was awarded a silver plaque engraved GYC No. 1. With the qualification cruise complete, a tough, two-entry competition for a GYC burgee was won by founder Tony Swain. His notation was a bow wave cutting a wake across the Gulf. The first meeting of the new executive took place at the Johanne Strauss night club. Our first Commodore still has the empty Veurve Clicquot Champagne bottle, signed by all those who launched the GYC. 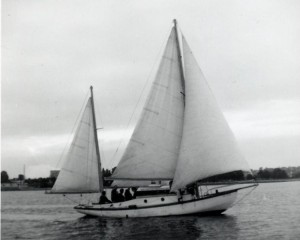 Meetings were first held at the Jericho Tennis Club but, by 1970, the Club had outgrown this facility, and moved to the Billy Bishop Legion. A few more years and the Club moved to its present home at the Maritime Museum. A lovely old fid was donated to serve as a gavel in place of the Commodore's ashtray.  The ship's bell from the Pamina was donated in remembrance of a member who died tragically at Boat Harbour, and this bell has been used to call meetings to order ever since.

The club has thrived on such traditions, providing a mutual understanding that really works. Sailing folk have a great time with families and friends at meetings, cruises, and annual banquets, with their numerous traditional awards.  A monthly newsletter, "The Gulf Sailor", tells stories of Club adventures, and informs the membership of future events.

Our next meeeting is our regular General Meeting on February 13, 2023 at the Maritime Museum and via Zoom.

More information about the program Doug has put together on the
Meetings page.

We are just finalizing the cruise calendar for 2023. Stay tuned!

The cruise calendar is available on the Meeting and Cruise Dates page.

Where To Find Us:

Vancouver  Maritime Musem. We meet at 7:30 pm the second Monday of every month except  July and August. See schedule for the rare exception.  Meetings & Cruise dates

Want to Become a Member?

﻿Are you interested in becoming a member but still have some questions? For more information go to Contact Us and Membership Information .